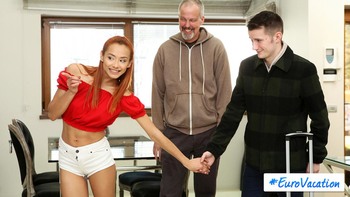 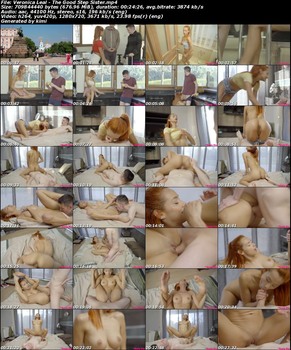 
Veronica Leal's dad just recently remarried. It turns out that Veronica's new stepmom has an older kid from an existing relationship who has traveled overseas to come visit. When Veronica lays eyes on Sam Bourne, her hot new stepbrother, she doesn't know whether to love him like a brother or a fuck buddy. Maybe a little bit of both. She isn't shy about her come-ons when her dad isn't looking, from spying on Sam in the shower to fondling him with her feet beneath their glass dinner table. After flashing her pussy at Sam in the kitchen, Veronica sinks to her knees and starts feasting on that hard cock like she's been wanting to do. She knows her dad can't see her from outside, but Sam just can't take the weirdness or the risk. He runs away as soon as he can.

Now that she's had a taste of the D, Veronica isn't going to take no for an answer. She waits until Sam is alone in his room and sneaks in to join him. Hopping onto the bed, she shushes Sam's protests and then resumes blowing him. There's plenty of ball sucking as she works up to deep throating her new stepbrother. Then she peels off her own clothes, making sure to put her incredible breasts on display for Sam's pleasure before she just slides right down on his erection to ride him in reverse cowgirl.